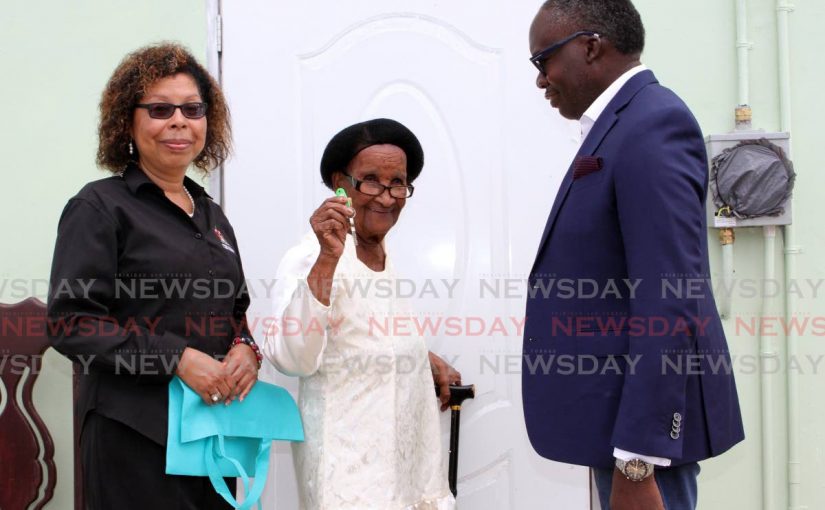 The Housing Ministry went into Christmas mode Friday, handing out keys to some 41 starter units to residents in three different rural communities on Friday under its Housing and Village Improvement Programme (HVIP).

The aim of the programme is primarily to provide "not just low income housing, but quality low income housing" to people. The Ministry distributed keys to three starter units in Todds Road, four in Talparo, and 34 in Moruga.

“I live here all my life and I really could not afford to fix-up the place," said Frederica Tyson, 91, of Daniel Scott Road, Talparo, as she received the keys to her refurbished home from Simone Thorne-Mora ,the housing ministry's permanent secretary.

"I am thankful and applaud the ministry for working on my home. I now have a place where I can be comfortable until my time comes to move on. It is a remarkable feeling to get an opportunity to see the little old home get fix-up."

Tyson said her home was in a terrible condition and was elated to see the upgrade.

"Thanks to God first and everyone who work on my home.”

Speaking at the key handing-over ceremony, Thorne-Mora said the HVIP programme was introduced by the Ministry of Housing and Development in 2018 and was implemented by the Land Settlement Agency (LSA).

She said the programme is a fair one because the recipients are selected based on a social scientific survey with specific criteria and a points system.

“Once the person or family receive their keys they can improve on it." she said.

"They can add to the house. It is like a starter house. The programme started in Moruga and from there we gave out keys in Toco, Rampanalgas, Marabella and now we are at Talparo.

It is the Christmas season and we are pleased to bring some Christmas cheer to some families who need it the most.”

The post Toco villagers get keys for starter homes appeared first on Trinidad and Tobago Newsday.