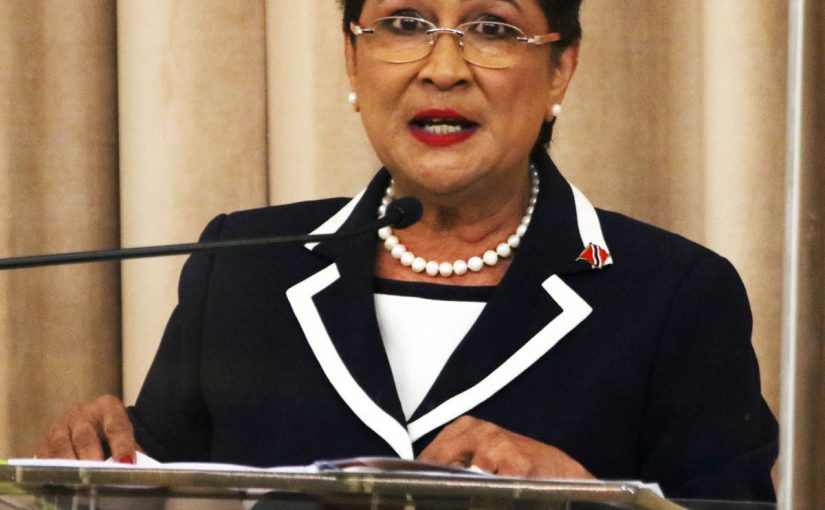 OPPOSITION Leader Kamla Persad-Bissessar is fighting back to keep control of the United National Congress (UNC), which Vasant Bharath is aspiring to wrest from her in the December 6 internal elections.

In a fiery speech as she launched her slate of candidates under the star symbol on Thursday night, Persad-Bissessar said she was not stepping aside to create a free passage for her lone opponent, who has not been around the party for the last five years.

Neither was she taking blame for the elections lost.

“Where were you?” She directed the question at Bharath without mentioning his name.

She said he not only stayed away from the party but campaigned against it, forming alliances with other entities, including the People’s National Movement (PNM). She said he has now come back home, seeking support of the members he denigrated, when all else has failed.

Telling supporters not to trust the “two-ants tag team” (Vasant Bharath and Devant Maharaj who has withdrawn from the race), Persad-Bissessar said, “These would-be leaders disparaged our economic transformation plan on every media platform and even assisted in endorsing the PNM roadmap manifesto by joining the PNM team.

“You think they really have the interest of the UNC or members of the UNC at heart?”

She said such attacks, including attacks on young candidates, “through nasty Facebook pages,” took a toll on the UNC and on undecided voters.

“Why would undecided voters vote for us when our own members were campaigning for the PNM against us?

“I am not stepping aside. Let us do battle in the political gayelle. Let us get down on the ground and let the membership chose their leader.”

Without identifying anyone by name, she suggested, “If they had helped us and campaigned with us, we might have got that 2,500 votes. We were just a breath away from the Government, with 19 seats to the PNM’s 22.”

“So don’t come here and say we lost. You were to blame. You were part of this blame. What did you do and where were you? You were never there except against us,” she contended.

She spoke about a vicious five-year cycle in the UNC in which after every general election, “the traitors and lazy opportunists and destroyers come out to damage the UNC,

“Every election since 2015 they campaigned against us to damage our chances. It was more important to them to attempt to humiliate Kamla and the UNC party to elevate themselves rather than to help the UNC win so we could improve the lives of our members.”

After the party lost government in 2015, she said, she stayed the course, but others fell aside while trying to damage the party.

"Five years after licking up this party, on the eve of an election you come to say, 'Let us unite,' to obtain positions and safe seats without having done any work in the previous five years.

“Their idea of unity is to parachute from the top.”

She lashed out at former Couva North MP Ramona Ramdial (without naming her). She said efforts were made to destroy the reputation of sitting Couva North MP Ravi Ratiram, against whom protests were mounted because he was favoured over Ramdial.

She said Ramdial sat in the Parliament for ten years under her watch, “but the day you did not get back your seat, you all over the country badtalking the party and the leader.

She also took aim at “some anti-mainstream media” which did not report concerns about risks with banks. She observed once anti-UNC sentiments were expressed they were guaranteed to get media coverage.

She warned, “Media does not win elections. It is the membership which will determine who wins the elections.”