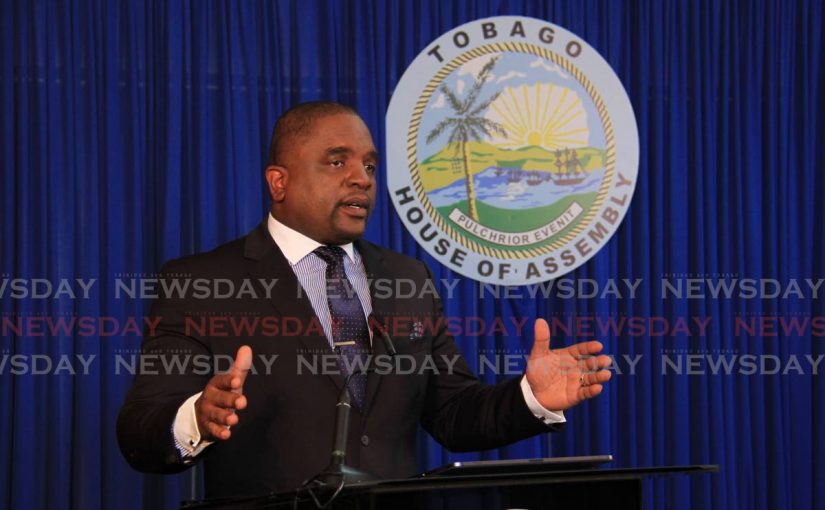 THA Deputy Chief Secretary and Secretary of Finance and the Economy Joel Jack has affirmed the Assembly’s commitment to maintain the standard of living and the quality of life of all Tobagonians, despite the shortfall in budgetary allocation.

Speaking at the THA’s budget reallocation review on Monday at the Assembly Legislature on Jerningham Street in Scarborough, Jack moved a motion outlining the priority programmes and projects for fiscal 2021, while also highlighting the strategies of the Assembly to maintain Tobago’s developmental momentum.

He said, “In Trinidad and Tobago, coupled with the challenges of confronting the covid19 pandemic, the prices of oil and gas, our country’s primary export commodity, has plummeted causing significant deterioration in our country’s fiscal position and forcing the government to reduce its expenditure and invariably the allocation to the Tobago House of Assembly for fiscal 2021."

He said the THA will achieve its objectives by a combination of prudent management of the budgetary resources and utilising innovative strategies to fund developmental activities and provide the necessary support to sectors affected by the pandemic, to accelerate the pace of economic recovery and to engender greater resilience in the Tobago economy.

“The overall budgetary allocation to the Tobago House of Assembly for fiscal 2021 is approximately 4.3 per cent of the national budget and is therefore consistent with the recommendations of the Dispute Resolution Commission which stipulates that the allocation to the Assembly should be between 4.03 per cent and 6.9 per cent of the national budget, and this is a departure from the barest minimum of 4.03 percent meted out to the Assembly during the period 2010 to 2015.

“The overall budgetary allocation to the Tobago House of Assembly for fiscal 2021 is approximately $2.6 million or 55.4 per cent less than in fiscal 2020,” he said.

Jack said when the fiscal package was presented in June, it was understood that there was a distinct possibility that they would not have received all the financial resources requested. While adding that he is also mindful of the other options available to the Assembly outside of the annual budgetary allocation to fund the fiscal programmes and this has been pursued aggressively under the alternative financing modality which includes the use of public private partnerships.

He said since the approval of the national budget, the Assembly has engaged in several meetings at the level of the executive council as well as a two-day retreat.

In outlining the fiscal adjustments and strategic priorities given the Assembly’s allocation, Jack said the Assembly proposes to treat with the funding gap by restricting recurrent expenditure by 8.5 per cent and limiting expenditure to $1.824 billion without affecting salaries, wages, the payment of gratuity and covid19 measures.

He said the total of the Assembly’s priority projects is over $700 million.

He went further listing a few of those projects.

Establishment of a skills development centre at Whim $6 million

Construction of the Scarborough abattoir $.6 million, repairs to the Castara and Pembroke youth centres $1 million

Construction of the Goodwood pavilion $6.9 million