Deyalsingh, 4 others wrote Medical Board on Sawh’s ‘disgusting’ conduct 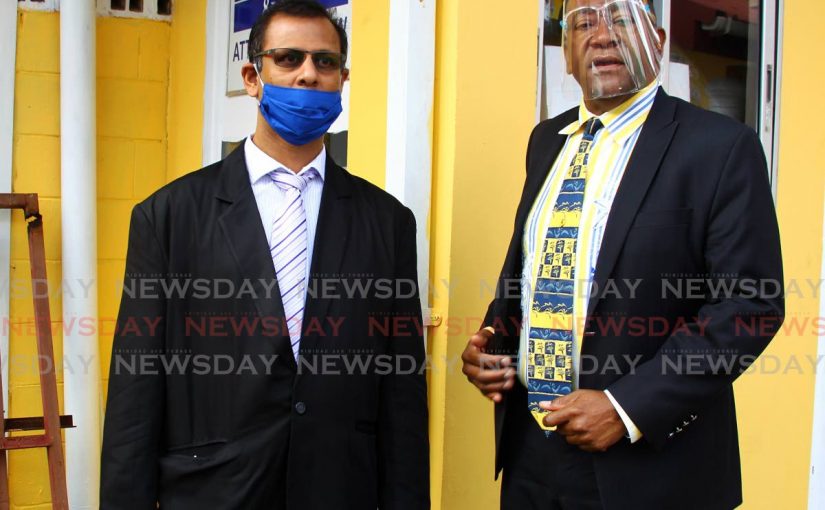 A DOCTOR, Health Minister Terrence Deyalsingh, an actor, and two others were the five complainants who wrote to the Medical Board about Dr Avinash Sawh's racist rant. The Health Ministry described Sawh's conduct as "disgraceful."

Sawh is currently facing possible disciplinary measures and public backlash. He was heard and confessed to making racist, obscene and discriminatory comments in voice messages which circulated on social media.

The San Fernando-based doctor has since apologised, but the Medical Board has written to him requesting an explanation of his behaviour.

Newsday received the official document for each complaint from sources close to the Medical Board.

In his letter, complainant the named doctor said the incident was "quite disturbing and disgusting," and he was a "concerned member of TT's medical fraternity.

"This incident has gone viral on several social media sites and displays him engaging in blatant racism, using racial slurs, verbally abusing an employee to the extent that a hostile working environment seems to exist, and additionally showed strong evidence of discriminatory hiring practices.

"Racism is an abhorrent scourge at all times. However, I believe we in the medical fraternity must be held to a higher standard and be particularly stringent in addressing any form of racism within the field to avoid potential impact on lives of patients. My concerns here extend far beyond this incident in particular, as I believe there is a very strong likelihood of this incident representing a long-term pattern of this individual’s behaviour."

An actor, also named, wrote, "I am writing with great concern after I was exposed to a Twitter thread containing what appears to be voice recordings of one Dr Avinash Sawh. In the recordings, Dr Sawh makes racist remarks and verbally abused an alleged employee." The actor included a link to the audio recordings.

"I am requesting an investigation into this matter. If Dr Sawh is as he portrays himself in the recordings, he is in violation of the Physician’s code of ethics. Please advise on a course of action if this contact is not the most convenient option to use in this matter."

Another complainant said, "Hello, I became aware of racially discriminatory hiring practices as well as other offensive and inflammatory comments by Dr Avinash Sawh on social media. I hope the matter will be dealt with accordingly."

Yet another complainant said, "It has been brought to the attention of several citizens that Dr Avinash Sawh of Sawh’s Medical Associates in San Fernando made very racist remarks toward persons of African ancestry and admitted to being racially biased when hiring nursing staff.

"I feel that this calls for immediate investigation and for his doctor's license to be revoked as it goes against the oath taken. Before this issue becomes much greater than it is, I think it is in the best interest of the Medical Board to address this issue because he is a horrible representation of what our country and the Medical Board stands for."

Attorney General Faris Al-Rawi had suggested Deyalsingh also write a letter to the board, which the latter did.

In his letter, he said the Health Ministry "noted the circulation in the public domain of allegations of infamous or disgraceful conduct in a professional respect regarding Dr Avinash Sawh, registered medical practitioner.

"As you are aware, this matter falls within the jurisdiction of the Medical Board of TT and given the nature of the allegations, it is expected that urgent action will be initiated by the board."

He said he "would appreciate" updates on the matter. The letter was dated November 6.

The initial letter to Sawh from the board's secretary Professor Hariharan Seetharaman said, "It has been alleged by the above that you displayed blatant racism, used racial slurs, verbally abused an employee and showed strong evidence of discriminatory hiring practices.

"You are requested to provide us with your written response to the allegations made against you within seven days of receipt of this correspondence. Upon receiving your written response, council will then decide on what further steps are to be taken (if any) and you will be informed accordingly."

He was initially given seven days to respond to these complaints but his attorney, Martin George, had asked the board for until mid-December.

Speaking with Newsday on Friday morning, George said the board acknowledged receipt of the request and said Sawh has until December 1 to respond.

Asked how far Sawh and his attorney have got with writing the responses to each complaint, George said, "We are working on it."

When Newsday tried to contact the Medical Board by phone days ago, we were told to send an e-mail.

No response to the e-mail has yet been received.

The post Deyalsingh, 4 others wrote Medical Board on Sawh’s ‘disgusting’ conduct appeared first on Trinidad and Tobago Newsday.