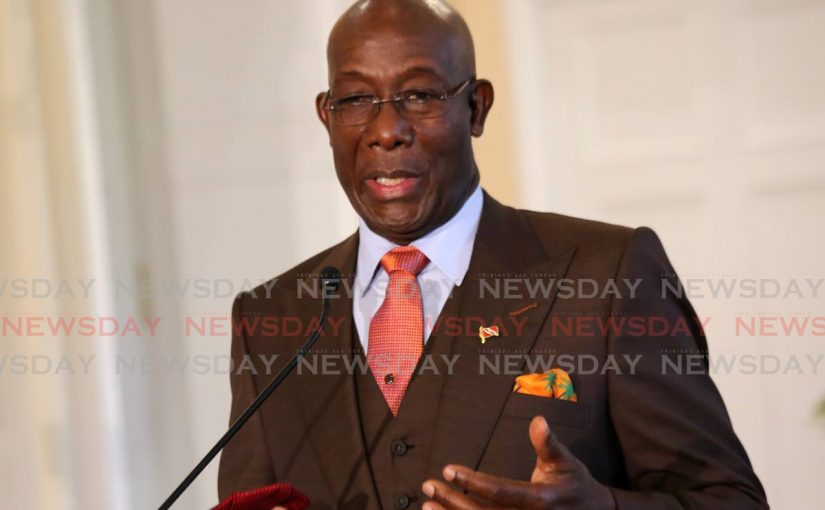 ONE MONTH ago the Prime Minister announced a rollback in a number of public health measures following a spike in covid19 infections and the confirmation of community spread. The period of these measures ends today and as Dr Rowley addresses a media conference, the public and various sectors eagerly await to hear whether the restrictions will be maintained, increased or possibly eased.

On August 15 Rowley announced a series of measures including: schools and all teaching institutions remaining closed until at least December 31; all in-house dining at restaurant and bars stopped but take-out allowed; beaches and rivers, water parks, places of worship, gyms, contact sports, casinos and members clubs, and cinemas all closed; congregation of people outside of homes reduced from ten to five; attendance at weddings and funerals reduced to ten; maxi taxi and taxis to operate at 50 per cent capacity; and travel to Tobago restricted to essentials.

Rowley also announced he was having discussions with the Attorney General about making the wearing of face masks in public mandatory. The law was passed in Parliament and went into effect August 31.

On August 15 there were almost 350 active cases and ten covid19-related deaths. From that time the number of active cases have mushroomed to 2,013 and the death toll has risen to 50, with deaths being reported almost daily and a record seven deaths on Friday

Earlier in August, Rowley said the country could not afford another lockdown (as was instituted in March but then began being eased from May). The TT Chamber also said businesses could not survive another lockdown.

The national budget will be presented on October 5 and economists are predicting a very tight budget due to massive revenue losses from covid19. Rowley has reported the pandemic has left the country with $15 billion hole.

In July, National Security Minister Stuart Young reported the ministry had granted 4,515 exemptions for people to return home, and there were still over 4,000 applications in the system. Last Saturday he announced there would be a more liberalised exemption policy to allow for the return of nationals. He told Newsday the ministry was working on two flights this weekend where we expect to repatriate approximately 240 nationals.

International Air Transport Association (IATA) Caribbean area manager Annaleen Lord, speaking on Tuesday during IATA's Latin America and Caribbean Press Call, said the association was awaiting the outcome of upcoming talks between TT aviation representatives and government officials on the reopening of borders, which have been closed since March. Newsday has received information from sources the Prime Minister will announce a date for reopening of borders and the resumption of domestic travel.

The Prime Minister addresses the population at 2.30 pm from the Diplomatic Centre, St Ann's.